What Paul Kelly Teaches Us About Success:

So just recently, I compiled all the figures for my tax return for the most recent financial year…

The financial year just gone had been the most successful for income derived solely from my business to date.

But here was the thing- during that year, there wasn’t a point that I secured a new client or signed off on a project and thought “Well this- THIS guarantees my best earning year so far!”

It wasn’t until I stopped, laid it all out in this document and added it up that I realised the fact.

It reminded me of one day in the middle of summer just a couple of years ago, when an old friend and I climbed to the summit of Mt Warning. We set off in the morning, beneath the tall canopies of rainforest trees, partially sheltered from the sun. The ascent was reasonably gentle- besides sections where there were loose rocks underfoot, it was a pretty easy climb and I was surprised how quickly we were making ground.

But then- the rainforest canopy ended. In front of us was a sheer climb up a rock face- so steep that there was a line of chain for hikers to pull themselves up. This incline stretched on as far as I could see, lined on either side with high scrub. So following my friend, we made our way up this steep, uneven rock face. I climbed with steady caution. You didn’t want to look back because you may lose balance and go tumbling down the sheer drop-off. Then about halfway, I realised it was quicker to clamber up the rock face on all fours, like a spider monkey!

At last the steep rock face ended. Beyond that was a gentle incline, a path that wound around a few corners- and then we were there. We’d reached the very peak of the mountain, 1,100 metres up. In every direction, you could see over the tops of mountains and landscape stretching all the way to the horizon. Only now could I appreciate just how far we’d climbed, how high up we were and why we’d had to hike for the last 2 hours…

Then skip forward to this week just gone, where in just a few days I saw two articles that addressed this (sometimes) challenging journey from different perspectives.

Neither of these articles necessarily reflect my thoughts on Gary Vee, but it’s interesting they both primarily reference him. Here’s the first one:

It came as a reminder that many people ignore one of the great truths about life itself- and keep searching for that “quick fix”. They think it’ll just take this course or that program and the zeros in their business account will automatically follow! Unfortunately, there are people who gladly capitalise on this misguided idea, and I could never endorse it-

Because almost nothing of real value comes easily.

Even the names who immediately flash to mind when you hear “successful entrepreneur”, didn’t get there within a single week or because they signed up for some program that made them rich. People might aspire to be like them, but would that still be the case if they had to climb their mountain to enjoy the view? This brings me onto the next point-

While the notion of getting rich quick is harmful to those who buy into it, neither should we glorify the struggle to achieve success. I decided some time ago that I wouldn’t throw away everything else there is to enjoy in this limited lifespan just to climb a mountain. Which is why this second article resonated with me:

I see this so often- people who go on about “the hustle” (which has to rank up there with “building an empire” as the most over-used modern entrepreneurial cliche!). These people take some kind of war-wounded pride in the hardship they encounter (mental, physical, financial) as they expand their business. It’s almost like they believe that without this struggle, they aren’t the real deal- like they’re not worthy of whatever fortune they may reap?

If extra zeros in your bank account, if recognition, more expensive holidays and nicer houses were a goal worth sacrificing all else in life for, those who’d achieved it would be the happiest people around.

If achieving my ultimate business outcomes meant I disposed of all else (family relationships, friendships, health, overall well-being) then it’d be a hollow achievement. And I would pity anybody who aspired to be like me.

I think of that mountain climb with my friend, and (like my recently completed tax return) it wasn’t until the very end, with everything laid before me, that I could appreciate the difference made by every step forward, every metre upward, every sale.

I think also of a Paul Kelly song that’s become part of Australian folklore. It’s a ballad in which he tells the (true) story of Vincent Lingiarri and his persistent campaign for the land rights of his people throughout the 60’s and 70’s. Vincent didn’t pay thousands for a ‘Get Your Land Rights In A Single Month‘ program. He didn’t glorify the sacrifice or the “hustle” to get what he wanted. It didn’t happen straight away. But after persistent meetings with people of influence, steadily going after what he believed in, and nearly a decade of waiting- one day PM Gough Whitlam touched down in Vincent’s community and, iconically, poured a handful of red dust into the palm of his hand. 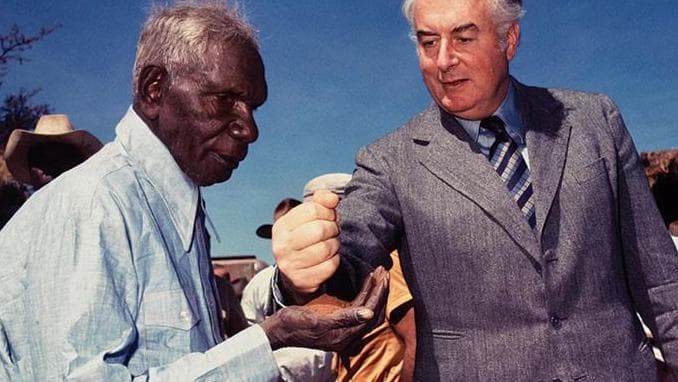 Some of us are happy to work through the night. Some of us need our sleep. Some of us go for a run first thing in the morning. Some of us prefer to go to the gym when our days’ work is done. We all have different ways of working, different approaches- but we need to make sure we’re in tune for the long haul.

This journey isn’t a sprint.

It’s not even a marathon.

Sure, we might trek a wrong path more than once. We’ll need to take a break. We’ll need to find other people who want to reach the same peak as us and have more experience than us. Along the way, remember that we often can’t fully appreciate our progress until we reach a certain milestone- and only then do we see our real achievement laid out before us.